Chronicles of Samus - Harmony of Shinesparkers 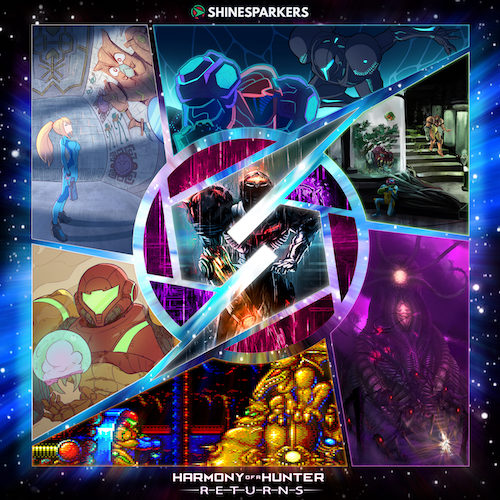 “OK, there’s so much to be said about this one. First of all, I didn’t think this would be possible. If we were doing this medley we would have to make it bigger and more epic than the first one. But the first medley was really well received and it was such a huge undertaking making that 10+ minute long track spanning all Metroid games and several different genres. However, Darren and I discussed it and we felt that it would be a great callback to 101% Run. I asked around among my friends to find a crew that I felt could make a solid track together. The first goal was to make a 15 minute track, but it turned into almost a 25 minute one. I didn’t really want to make many tracks myself but didn’t have much of a choice since time started running away and the crew didn’t have time to take on any additional tracks on the ones they were doing already. I’m super proud of everyone involved in this track and, for me personally, this is one of the coolest tracks I’ve been a part of. It tells the story and the journey that players have taken with Samus since the NES days. One game at the time in the order of their release and at the end sending a short little hint at the future of Metroid with the inclusion of the vs. Corpious melody from Metroid Dread. I’m just super proud and so thankful for everyone involved in this! I think it turned out absolutely great! It was really close that it wasn’t finished on time, but here we are and the track is on the album. And it’s way better than I ever dared hope.”
Sebastian Mårtensson